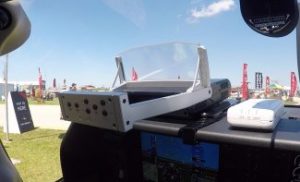 Head-up displays, once and still the stuff of airline and military cockpits, will soon be an option in Cessna’s single-engine aircraft line. Cessna will offer the new Epic Optix Eagle HUD, a low-cost combiner display that’s capable of projecting not just basic flight data, but all kinds of imagery that any tablet can output.

The Eagle’s bright, three-color display is easily visible in bright sunlight and rather than the pull-down combiner that mounts to a ceiling fixture that HUDs typical have, Epic Optix’s product clamps the glareshield directly in front of the pilot. The screen is about 20 inches from the pilot’s eyes. The Eagle clamps to the glareshield and can also mount with commercial mounts from MyGoFlight and RAM. Because it’s a portable device, no approvals are necessary and it can be moved from aircraft to aircraft easily.

“Up until now, there was no true head-up display for general aviation,” Epic Optix CEO Ray Kwong told us during an interview at Sun ‘n Fun. “So the idea was that we needed to build one that would fit into most general aviation aircraft, be cost effective and high performance,” he adds. Although the Eagle is portable, it does need to be level and on the horizon when in use.

Textron will offer the Eagle as an option, but it can also be purchased as an aftermarket accessory directly from Epic Optix at www.epicoptix.com. Retail price is $1999. Watch for a video report on the Eagle later this week.